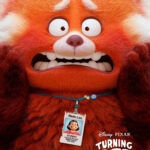 Growing up is a beast. Check out the new trailer for the upcoming all-new original feature film Turning Red from Pixar Animation Studios’ director Domee Shi. Be the first to see the new movie posters and official trailer for Disney and Pixar’s Turning Red, coming spring 2022.

Young actress Rosalie Chiang lends her voice to Mei Lee, a 13-year-old who suddenly “poofs” into a giant red panda when she gets too excited (which is practically ALWAYS).

Sandra Oh (“The Chair,” “Killing Eve”) voices Mei Lee’s protective, if not slightly overbearing mother, Ming, who is never far from her daughter. An unfortunate reality for the teenager. Directed by Shi and produced by Lindsey Collins, Disney and Pixar’s “Turning Red” releases March 11, 2022.

In Disney•Pixar’s all-new short “Bao,” director Domee Shi explores parenthood, empty-nest syndrome, and food lots of food. When an aging Chinese mom crafts a dumpling that springs to life as a lively, giggly dumpling boy, Mom happily jumps at a second chance at motherhood. But Mom’s newfound happiness is short-lived when her precious dumpling insists on growing up.

A wonderful Interview with Director Domee Shi and Producer Becky Neiman Post. For Pixar’s first all-woman-directed short in Pixar History, Bao: A Pixar Short To Treasure. While in LA for the #Incredibles2Event I had the honor of meeting these powerful and creative women in person and interview them. Learn more about the origins of this short film and how it went from just an idea to the big screen.

You’re invited into the exceptional, fantastical, and magical Casa Madrigal. Watch the new trailer for Disney’s Encanto now and see the movie this November!

A new trailer, poster, and images are now available introducing audiences to Walt Disney Animation Studios’ “Encanto,” the tale of an extraordinary family, the Madrigals, who live hidden in the mountains of Colombia in a magical house, in a vibrant town, in a wondrous, charming place called an Encanto.