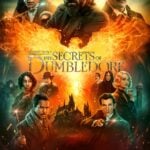 Get ready for the newest adventure in the Wizarding World™ created by J.K. Rowling. Warner Bros. Pictures’ Fantastic Beasts: The Secrets of Dumbledore arrives In US theaters on April 15th!

Fantastic Beasts: The Secrets of Dumbledore

He entrusts Magizoologist Newt Scamander (Eddie Redmayne) to lead an intrepid team of wizards, witches, and one brave Muggle baker on a dangerous mission.

Where they encounter old and new beasts and clash with Grindelwald’s growing legion of followers. But with the stakes so high, how long can Dumbledore remain on the sidelines?

Watch the official trailer for Fantastic Beasts: The Secrets of Dumbledore on youtube today!

FANTASTIC BEASTS: THE SECRETS OF DUMBLEDORE will be in US theaters on April 15th, 2022.

Cast of FANTASTIC BEASTS: THE SECRETS OF DUMBLEDORE