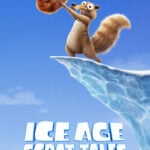 Ice Age: Scrat Tales debut on Disney+ April 13th. Starring Scrat the hapless saber-toothed squirrel of the Ice Age adventures, who experiences the ups and downs of fatherhood. Catch all of the Six All-New Animated Shorts on Disney+!

Disney+ has released the key art for Ice Age: Scrat Tales. “Ice Age: Scrat Tales” is a series of six all-new animated shorts starring Scrat. The hapless saber-toothed squirrel of the “Ice Age” adventures, who experiences the ups and downs of fatherhood.

As he and the adorable, mischievous Baby Scrat, alternately bond with each other and battle for ownership of the highly treasured Acorn. I am so excited to stream these new Ice Age: Scrat Tales shorts on Disney+!

Nutty Reflections – Directed by Donnie Long and Eric Prah. Story by Galen Tan Chu. In “Nutty Reflections,” Scrat and Baby Scrat run after The Acorn into a dark cave, which resembles a creepy funhouse hall of mirrors.

Teeter Toddler – Directed by Jeff Gabor and Donnie Long. Story by Galen Tan Chu. In “Teeter Toddler,” thanks to a dodo bird, Scrat, and Baby Scrat end up on opposite sides of a log held up by a single branch.

Nut The End – Directed by Lisa Allen Keane and Donnie Long. Story by Michael Thurmeier. In “Nut The End,” The Acorn goes flying off a cliff. With it seemingly gone forever, can Scrat and Baby Scrat live in harmony?

Check out this fun interview I had with the host of Millionstories.com’s newest series Wags to Riches. Dariany is an animal lover that loves to try new things. Dariany is so much fun to talk to, it was really cool to get some behind-the-scenes details about the show.

Along with a fun story about how a Goat stole her lines during one of the best episodes in my opinion. That and her first date in a Cat Cafe, I mean I’m totally down to have a first date in a cat cafe!

Learn more about the host and find out what to expect in this fun new series that explores businesses with animals as their main focus.