Home » Blue’s Clues & You: Story Time With Blue – Interview with the Creators of Blue’s Clues! 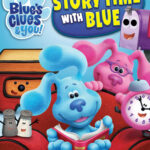 Are you ready for Story Time with Blue? Play Blue’s Clues to help figure out Blue’s favorite story. Then, imagine along with Josh and Blue, attend Blue’s first pajama party, and help Blue’s friends discover her favorite part of bedtime!

This special 2-DVD set also includes Blue’s Biggest Stories in celebration of the 25th anniversary of Blue’s Clues! Steve and Joe join Blue and all of her friends for more stories!

Order the Blue’s Clues & You: Story Time With Blue DVD on Amazon or your local retailer today!

Disc One – Blue’s Clues & You! Story Time with Blue:

Interview with the Creators of Blue’s Clues

I had the honor of interviewing the creators of Blue’s Clues last week. During the interview, we talked about the origins of the Blue’s Clues show and how it has grown over the last 25 years.

It was an amazing experience and cool to learn about a show that I used to watch as a kid.

Watch my full interview with Traci Paige Johnson and Angela Santomero, where we talk about their newest 2-disc special Blue’s Clues & You: Story Time With Blue.

Along with some fun facts and behind-the-scenes information about how this show went from a script to television.

The creators of Blue’s Clues share how their personal life experiences from their childhood, made it into the show.

As well as more information about how they keep Nickelodeon’s Blue’s Clues show relevant in these modern times. So take a seat in your thinking chair and check out my full interview above.

You Can’t Spell Blue without YOU Video

Nickelodeon is commemorating 25 years of its groundbreaking animated series Blue’s Clues, which launched Sept. 8, 1996, with a one-of-a-kind nostalgic music video titled “You Can’t Spell Blue without YOU,”

Available to view on Nickelodeon and the Nick Jr. channel and across Nick Jr.’s social media platforms, the music video was directed by Steve Burns.

In “You Can’t Spell Blue without YOU,” Blue and the Blue’s Clues hosts acknowledge the generations of fans throughout the years through song.

The video features a series of images and art from past and present viewers as well as fans all grown up holding up photos of themselves as little kids.

With critical praise from educators, parents, and preschoolers, Blue’s Clues has generated an enormous global fanbase over the years in over 160 countries and more than 20 languages. Blue’s Clues drew acclaim and high ratings for its unique interactivity that helped change the way kids watch television and has remained one of the most popular preschool shows of all time.

About Blue’s Clues & You!

The legacy and lasting impact of the series continues with the remake of Blue’s Clues & You! in 2019, which has a new generation of preschoolers searching for clues with beloved puppy Blue and new live-action host Josh (Josh Dela Cruz).

The series features new CG animation for Blue and Magenta, brand-new elements, and refreshed iconic items from the original series including an updated Handy Dandy Notebook.

Equipped with smartphone technology and the return of fan-favorite characters. Blue’s Clues & You!, produced by Nickelodeon Animation Studio in Burbank, Calif., was recently picked up for a fourth season and nominated for two Daytime Emmy Awards. Currently, in its second season, the show airs weekdays at 11 a.m. (ET/PT) on Nickelodeon.