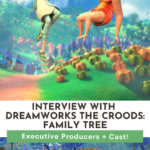 Everyone’s favorite prehistoric family, The Croods, is back in an all-new series featuring The Betterman’s! DreamWorks The Croods: Family Tree follows the hilarious escapades of these two families living life in one big treehouse.

Watch my full interview to find out what the executive producers Todd Grimes, and Mark Banker, along with the voice of Ugha Amy Landecker think about this new series.

Including some fun facts about the show, you haven’t seen or heard anywhere else. DreamWorks The Croods: Family Tree is now streaming on Hulu and Peacock TV today!

About The Croods: Family Tree

The Croods: Family Tree continues the ever-evolving story of the Croods and the Betterman’s as they learn to live together on the most idyllic farm in prehistory.

The journey from sparring rivals to unlikely friends is fraught with hilarious misadventures as the two families slowly overcome their differences to turn a treehouse divided into a tree home united.

DreamWorks The Croods Family Tree Trailer is now available on youtube! Click on this link to view the full trailer.

Watch my full interview with executive producers Todd Grimes and Mark Banker, along with Amy Landecker who plays the voice of Ugga in this new series. I had such a blast talking to them and learning about all the fun things to expect!

Including some fun hush-hush information about how we will be expecting some NEW animals on the farm. AND possibly some new characters? You have to tune in and watch DreamWorks The Croods: Family Tree on Hulu to find out!

Todd Grimes is best known for his recent work on DreamWorks Animation’s series The Epic Tales of Captain Underpants.

Award-winning, Emmy-nominated writer, producer, and director Mark Banker began his career while attending the University of Wisconsin-Madison as a writer, national advertising director, and associate publisher for the satirical newspaper, The Onion.

About Amy Landecker (Voice of Ugga)

Amy Landecker started her career as a theatre actor in Chicago IL, where she worked with the Steppenwolf and Goodman theaters. A Bob Falls-directed production of Rebecca Gilman‘s brought her to NYC and the Public Theatre. While in NYC, she worked at the Barrow St Theater and Second Stage.