Spring is here and all of the flowers in Virginia have begun to bloom. I’m celebrating this beautiful season with you guys by hosting a super special giveaway with the help of Universal Pictures Home Entertainment. My Dolittle Spring Basket Giveaway features some insanely cute prizes as well as new plush friends that can help keep your little one’s imaginations going.

Make sure you scroll below and check out some fun information from Dolittle on How To Communicate With Animals. As well as some info about what to expect from this film if you haven’t already caught it in the theater.

About The Dolittle Film

After losing his wife, he hermits himself away behind the high wall of his manor but is forced to set sail on an epic adventure when the queen falls gravely ill. Helping Dolittle in search of a rare cure are his rambunctious animal friends including Chee-Chee (Malek), an anxious, self-conscious gorilla; Dab-Dab (Octavia Spencer, The Help), an enthusiastic but bird-brained duck; the bickering duo of cynical, neurotic ostrich Plimpton (Kumail Nanjiani, The Big Sick, “Silicon Valley”) and chilly-but-chill polar bear Yoshi (Cena); as well as a headstrong parrot named Polynesia (Thompson).

STRAIGHT FROM THEATERS AND YOURS TO KEEP, LOADED WITH NEVER-BEFORE-SEEN, BEHIND-THE-SCENES SECRETS ON THE MAKING OF THE FILM, CAST INTERVIEWS, AND MORE!

Own the movie all the animals are talking about and go an epic journey with a hilarious always cold bear, an anxious gorilla, a lovable giraffe, a ferocious tiger, and more! Scroll down to enter to win in my Dolittle Spring Basket Giveaway! 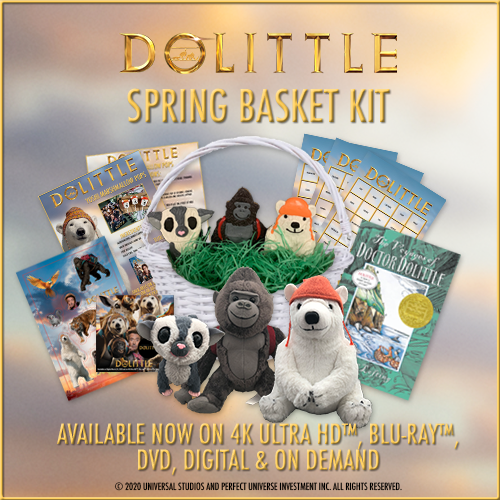 DOLITTLE will be available on 4K Ultra HD™, Blu-ray™, DVD and Digital.

One animal I would like to talk to is my dog, Athena. I would tell her how grateful I am that she is a part of my family!

I would love to talk to monkeys!

Dolittle is a really fun movie! I have seen it and really loved it!

One animal I would like to talk to is my dog, Iris. I would ask her why she seems to enjoy watching TV more than her siblings do.

I would have fun talking to polar bears!