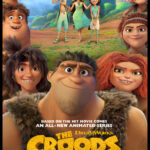 DreamWorks Animation announced today The Croods: Family Tree series, inspired by the hit film The Croods: A New Age, premieres on Peacock and Hulu on September 23. Watch the prehistoric preview below!

DreamWorks The Croods Family Tree Trailer is now available on youtube! Click on this link to view the full trailer.

The Croods: Family Tree continues the ever-evolving story of the Croods and the Bettermans as they learn to live together on the most idyllic farm in prehistory.

The journey from sparring rivals to unlikely friends is fraught with hilarious misadventures as the two families slowly overcome their differences to turn a treehouse divided into a tree home united.

In 2013, the modern day was introduced to the first family of the prehistoric one with The Croods. Starring Nicolas Cage, Emma Stone, Ryan Reynolds, Catherine Keener, Cloris Leachman and Clark Duke, the Academy Award®-nominated comedy about a clan dealing with their changing world swept up global audiences, reminding us of the timeless importance of family…and just how little we’ve evolved.

Since then, The Croods has become a global franchise, earning more than $785 million worldwide.  In 2020, DreamWorks Animation invited audiences on an all-new adventure back in time with The Croods: A New Age.

Having survived their fair share of dangers and disasters, from fanged prehistoric beasts to the end of the world, The Croods faced their biggest challenge of all: another family. And their adventures are just beginning.

Looking for more DreamWorks-related content? Don’t miss this fun video interview with the cast of DreamWorks The Mighty Ones. Alex Cazares voices outgoing Very Berry, and Josh Brener voices the stick in the mud Twig.

During our interview, we talk about some of their favorite childhood memories in their backyards. As well as some fun behind-the-scenes facts you won’t find anywhere else.