Read an Exclusive Interview With Javier Bardem, who plays Captain Salazar in Pirates Of The Caribbean: Dead Men Tell No Tales. While in Los Angelos I had a chance to talk with the cast and ask some of the questions we are dying to know the answer to.

This gorgeous Oscar-winning, wonderfully talented man Javier Bardem who played Captain Salazar was a delight to interview. I could not stop laughing (and smiling) and cannot wait to share with you the many things we talked about.

I could have listened to Javier Bardem talk all day long, his voice is so amazing to listen to I was sad when the interview concluded. There was a part of the interview where we asked him what it was like working with Johnny Depp and what was Chemistry like. Javier replied by telling us about his first encounter with Johnny Depp on set for his movie “Before Night Falls”.

Only seeing Johnny Depp from the backside he exclaimed that he had a “nice bum”, someone chimed in and said “that’s Johnny Depp”, he said, “I don’t care that’s a nice bum”. Ever since then they have been good friends. The whole room was rolling in the laughter of what it must have been like on set for these two.

Let’s jump into the interview below and explore what it was like for Javier Bardem to play this supervillain, Captain Salazar.

Don’t miss out on any of the celebrity interviews from the 5th installment of Pirates Of The Caribbean: Dead Men Tell No Tales. Click on the name of the interviews you would like to read about below, also don’t forget to check out all of the other adventures during my PiratesLifeEvent press trip in LA.

Black Goo. It was a liquid. They told me it was supposed to be like chocolate, chocolate my ass. That taste worse than that, so, and they were supposed to put it on the teeth. I said give me that, so I drunk it and then I went to play the first scene, I think it was with Geoffrey Rush and it starts to pour out of my mouth and he was very disgusted. And I thought it was like a rage pouring out, right?

Portraying  Emotions Through All That Makeup

That was one of my concerns to see if my facial expression can go through the mask, but these guys who won the Oscar for “Mad Max,” these makeup people. They are young, from Australia, and they did an amazing job and once I had the mask on the face, I realized that I could express myself through it, which is important. Otherwise, your performance is killed by it.

And, one of the things that these special effects people have done so well in this movie is that they brought magic into the performance without killing it, like the hair, it’s fantastic. I think we have gone maybe more or stronger on it or, but they are writing this in the right place, so it’s there but it doesn’t kill the physicality of the performance.

How Involved Were You In The Project?

I got involved back then, 2010, because Penelope was shooting “Pirates 4” so I went to the set in Hawaii, a beautiful place, and Los Angeles it was, and London, and I was very envious. I was very jealous because I was seeing all this amazing production taking place, the water, the special effects, the boat, the sword fighting. I wanted to be one of those. So, I said to Jerry, Jerry please, give me a job.

He called me five years after and I was so surprised and honored because as a movie goer, I love the franchise. So, I knew that production wise and experience wise it was going to be great. Now it was a matter of what’s the story and what can I bring to the character, and when they gave it to me, I thought it was this great thing about one same character played in two ways,

CGI Effects, and That Hair!

Yeah because I was working a little bit on the darkness with the makeup because the face was better but the hair, they showed me some pictures and videos and it was like yeah, right, looks great but how is it going to look like at the end, so when I first saw the movie, having in mind that I was never on the scene. The whole movie was shot in the studio, so I didn’t see that ship, the sea for a second. That’s not true.

The scene on the beach when they’re escaping from the sharks and I’m getting close to the shore, that was an amazing beach, a natural park called “White Sand Heaven” in Australia, beautiful. Crazy, the sand is so white, but the rest was in the studio and when I saw the movie, it’s like I’d been on the sea forever.

His Villainous Roles In Previous Movies and Now With Disney

I tried to see what’s the thing that makes them different from each other and I’m saying that I haven’t done so many villains. I’ve played three, which is “No Country,” “Sky Fall” and this one, but I guess the movies are very powerful in their own genre, and he has some makeup, those villains because the movie had some makeup.

And they are different genres, being “Sky Fall” and this one similar in some ways because it’s a fiction world, fiction in the sense that if you play a villain in James Bond or here, you have to, as I said, before bringing it up a little bit because people are expecting that.

When “No Country for Old Men” was a drier movie, a drier story, and more yeah like rough, so no, the only thing that I was inspired by was the idea of this wounded animal and also the idea that at the time, in those times, the Spanish army was very powerful in the seas and the captains were from the south of Spain and the south is where the flamingo is.

The whole bullfighting culture belongs to, so I didn’t I wanted to bring some of that flavor into the character which for a foreigner it wouldn’t be that obvious but for a Spanish audience, I guess they will get a little bit, a little bit of a glimpse into that.

Fond Memories Working With Johnny Depp In Past Movies

It was 3 p.m. Pople were like fainting out of the heat, and there was only one umbrella and of course, the production went running to watch him with the umbrella and he was like no. The umbrella is not for me. The umbrella is for Javier because that’s the guy who has to keep shooting when I leave. You need to protect him. And that was without making too much noise about it, but I saw that and I thought that says a lot about him.

And when I do the movie now, in 2015, he was the same guy except that he’s playing Jack Sparrow which is an iconic character and he’s starting to do this, then rolling, boom, he becomes Jack Sparrow and he’s so funny to watch and he will do and say anything and he will be brilliant so I had to cut sometimes the scene because I was laughing, I cannot hate you, but he’s a great colleague and a beautiful guy.

I would say always, I bring my own sketches and not because I want to impose that but it’s how I see it, and then, of course, somebody that draws better than me just does it. I studied painting and I wasn’t very good at brushes. I was more into the pencil and the ink.

And I’ve always been drawn into drawing faces and bodies and expressions so I guess that’s why I’m an actor. Rather than landscapes or motorcycles, I draw people’s faces, so I’m good at that and I like to bring that part into my process because it’s something that I imagine, and yeah, and I brought that but of course they may be, they did it better.

Have you tried that floating hair on your painting?

No, no, the floating hair was an idea that the directors brought and I thought okay, but what do you mean, floating hair, like that? Like a troll? No, no, then little by little, they were bringing all these drawings and concepts and I was amazed by it. 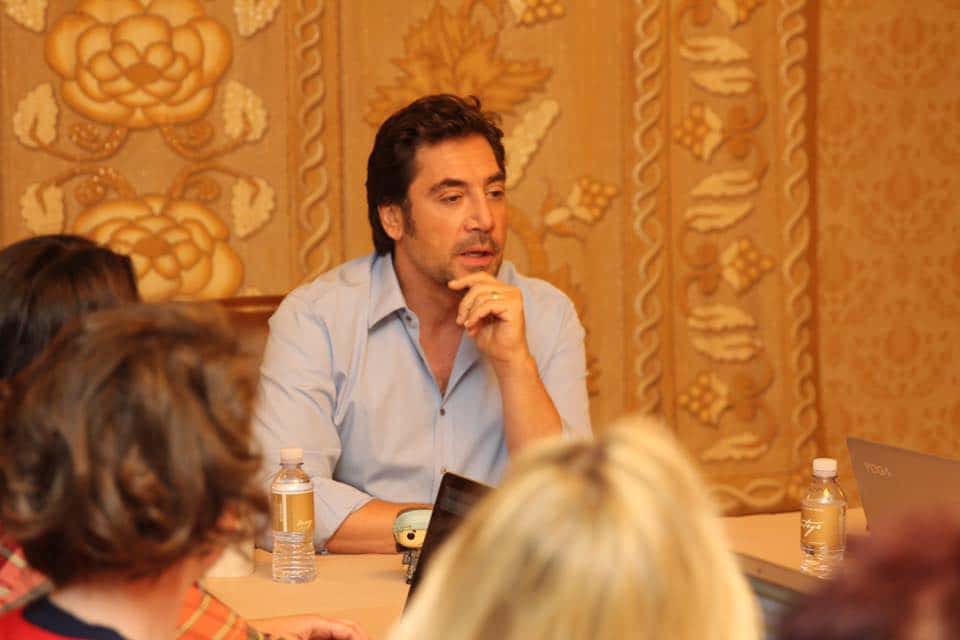 I played #3, I played in Spain and I’m saying that being a rugby player in Spain is like being bullfighter in Japan, it doesn’t make any sense. I mean, in the sense that we don’t have a very strong rugby culture. We love it, more and more, because it’s become professional so people are now getting to know it better, but back in my day, there were not so many. I was captain of the national team.

Like in rugby, there’s no such thing as football, like you are one of the team and that’s the same like a movie set. I’m always saying that because I played rugby for almost 20 years, I know what a movie set is. You are part of the team and in the moment where you think of yourself more important than the rest, everything is going down. The goal, the aim is destroyed, which is bring the ball to the side of the line.

I hope you enjoyed this interview as much as I did, what was your favorite part of this interview? Were you as surprised as I was with how Javier and Johnny Depp met for the first time? If you haven’t already make sure you check out The Pirates Of The Caribbean: Dead Men Tell No Tales Offical Movie Trailer below!

I highly recommend seeing this movie in Dolby 3D or at least in Dolby Cinema. It’s amazing and you won’t want to miss a second of this amazing adventure with that crazy pirate we all love.

PIRATES OF THE CARIBBEAN: DEAD MEN TELL NO TALES opens in theaters everywhere May 26th, 2017.