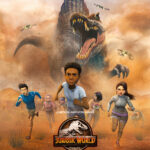 The campers set sail away from Isla Nublar only to discover a new island full of mysterious threats. The escape is only the beginning in all-new episodes of Jurassic World: Camp Cretaceous Season 4, coming to Netflix on December 3rd!

DreamWorks Animation has released the season four trailer for the hit Netflix series Jurassic World: Camp Cretaceous debuting December 3! The kids and I are so excited to see what our favorite group of teenagers is up to in this crazy Jurassic World.

Joining the cast this season includes Kirby Howell-Baptiste (Cruella, The Good Place) and Haley Joel Osment (The Kominsky Method). Check out the trailer for season four below!

Finally escaping Isla Nublar, the campers find themselves in grave danger when shipwrecked on a mysterious island. As the group begins to uncover the strange secrets of this new land, they must hatch a plan to not only save themselves but also protect the dinosaurs from the sinister forces at work.

A new adventure camp on the opposite side of Isla Nublar, who must work together to survive when dinosaurs wreak havoc across the island.

Season 3 is streaming now on Netflix, along with season 1 and season 2.

If you are like me and my kids then you will want to binge the whole series from Season 1 to Season 3. You especially will want to check out the Convy and frozen pizza scene again after you hear about Raini Rodriquez’s experience recording that episode.

Let’s just say I won’t be able to look at that scene again and not laugh.

Don’t miss my Interview with Jurassic World: Camp Cretaceous Executive Producer Scott Kreamer where we talked about all things Jurassic World and more below!

I had such a great time sitting with the Executive Producer Scott Kreamer where we talked all things Jurassic World and more!

We discussed everything from the making of the series, what it was like working with the campers, and what we could expect with this series in Season 2.

No spoilers though, so make sure you stream all the seasons 1 through 3 on Netflix today!

Learn more about what to expect in Season 1, Season 2, and Season 3 on my blog. Also don’t miss some of the fun interviews I shared on my blog, with the cast and creators of Jurassic World: Camp Cretaceous

Previously Scott had shared his favorite dinosaur was hands down the T-Rex. So I made sure to ask him if he ever did have a dino best friend what dino would it be. Check out his response in the full interview video above.