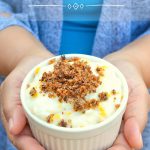 Maja Blanca is a popular Filipino dessert, its thick creamy custard texture is sweet with bits of yellow corn and topped with homemade Latik.

The holidays aren’t truly complete in my Filipino American home without having the Maja Blanca on the table. I have grown up seeing these delicious dishes at all of our holiday parties.

Depending on who brought it to the party always decided with it would feature delicious Latik of if it came in all its glory as is. If you are a coconut lover then this is the perfect dessert dish for you.

The History of Maja Blanca

To back up and understand the origins of this delicious dish I would have to take you back in time to when The Philippines was a bigger mix of cultures. During the time when Spain had a lot of influence on our foods and language, you find delicious dishes that came from this.

Maja Blanca has a rich historical background having originated from Spain and was adapted from the traditional Spanish holiday referred to as manjar blanco, which actually means white delicacy.

How to make Maja Blanca

Maja Blanca is one of those recipes where it’s so easy to make and the ingredients are almost always on hand in our homes. That its normal to see this dish not just during the holidays but any day of the week.

While you might only see them during the holidays you will find them amongst many Christmas Potlucks, Thanksgiving, and New Year’s Eve Parties. The consistency of Maja Blanca is thick, which is similar to gelatin, and usually has a creamy or off-white color.

I typically like to make my own Latik for my traditional Maja Blanca topping which is actually super easy to do. Find the full recipe for Maja Blanca as well as Latik which is made from canned coconut milk.

Looking for more Filipino Recipe ideas? Try some of my most popular recipes on the blog, like my Pressure Cooker Filipino Leche Flan, its a family favorite, and is highly requested during the holidays. I promise you won’t make this famous dessert any other way once you see how easy it is to make in the Instant Pot.

[…] Maja Blanca is a popular Filipino dessert, its thick creamy custard texture is sweet with bits of yellow corn and topped with homemade Latik. […]